A new chapter in photography is opening up for me – but it is one which is distinctly retro and vaguely familiar.

I have invested a relatively small amount of money in a Zenit-3 camera, made in the Soviet Union in 1968. It is very solid, its weight protected by a fragrant leather case – and entirely mechanical. There’s no sniff of a battery here, and of course it takes rolls of film. That’s what we all used to do before the advent of digital cameras and memory cards.

The familiarity comes from being old enough to remember film photography, while around 1980 my late father bought me a Zenit camera which I remember very well.

My hands were too small to handle this metal chassis, while the finer points of aperture and shutter times were a little beyond me. But it was used to produce slides from family holidays and star trail captures from an interest in astronomy.

This memory was revived by Stephen Dowling, a  friend with a passion for vintage photography. His Flickr stream shows just what can be achieved with Soviet cameras and spurred me into my recent purchase.

In the first few tentative weeks I’ve mechanically loaded the first film, which is a feat in itself. The first shots without a digital guide to light levels have been a challenge. So has remembering to stop the aperture myself.

But the love affair is taking root – the clunk of the shutter is beautiful and focusing by hand delicious. It’s a world away from my trusty, nimble and lightweight Lumix which will remain the main tool of my photographic endeavours.

What the first black and white film from my Zenit yields will remain a mystery until it’s been developed, but I look forward to sharing the results here. 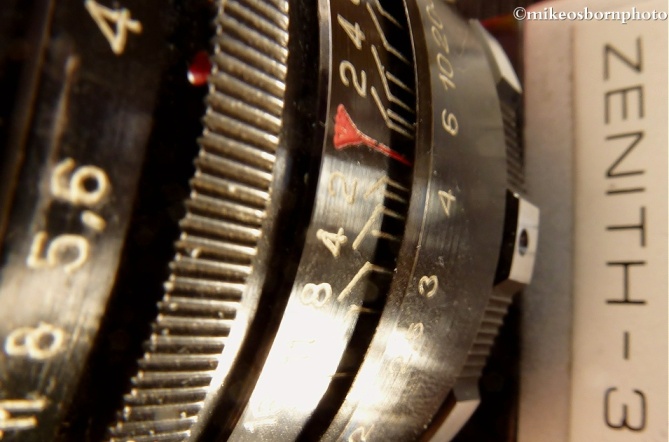 28 thoughts on “My new Soviet friend”