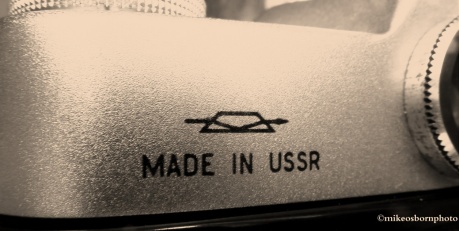 In October I excitedly announced the arrival of my new camera – a Zenit made in the USSR nearly 45 years ago. It’s a mechanical beauty which takes film, and I quietly went about getting to grips with analogue.

I’ve been running my digital cameras as normal – more recently a Fujifilm X-E1 – so it’s taken a long time to come near to filling a roll of monochrome film and sending it off to the processing lab to see the first results.

This looked tantalisingly likely this weekend, so I braved the cold to capture those closing shots.

My Zenit-3 seemed to promise a couple of bonus shots, as I was expecting the shutter lever to tighten and signal the film’s end. But it just didn’t happen.

Back in the warm, I decided to manually rewind the film – only to discover there was no tension there at all. I opened up the back to find my worst fears had come true.

The film was torn from its cartridge and the entire roll was ruined.

Well the post-mortem showed that I’d made a very stupid mistake. This majestic old camera doesn’t tell me the film is nearing its end. When the mechanical counter reaches 36, that’s your cue to rewind the film. Don’t try to squeeze a couple of extra clicks.

So this was a Soviet disaster, although maybe not on the scale of Chernobyl. Another film has been loaded into the Zenit and I’m going to start all over again.

This isn’t a digital camera where you receive a polite message if your memory card is full up. It requires an old-fashioned kind of respect. It’s been tempting to give up this analogue journey and its pitfalls, but I’ll keep going.

This camera has been around longer than I have, so I’ll take notice of my elder and learn from her.